Now that #IndieWeb buillding blocks have reached a each generation originally proposed in the Generation model the community has begun to explore a broader conceptual models to explain our work. Innovation systems and system network agent theory provide an interesting model

Now that #IndieWeb building blocks have reached each generation originally proposed in the Generations model the community has begun to explore broader conceptual models to explain our work.

In our research, I stumbled on System Network Agent Theory the model provides many interesting parallels for our community.

In effect, the IndieWeb community seeks to bring about transitions in society as an innovation system.

IndieWeb is an  "innovation system." This theoretical concept grew out of the ecological perspective in socio-technical system research.

According to Freeman (1987) Innovation Systems are “networks of institutions, public or private, whose activities and interactions initiate, import, modify, and diffuse new technologies.” This is usually towards a shared goal. Under the umbrella of IndieWeb as an innovation system, we can analyze how it hopes to affect change by applying  System Network Agent Theory to our analysis. 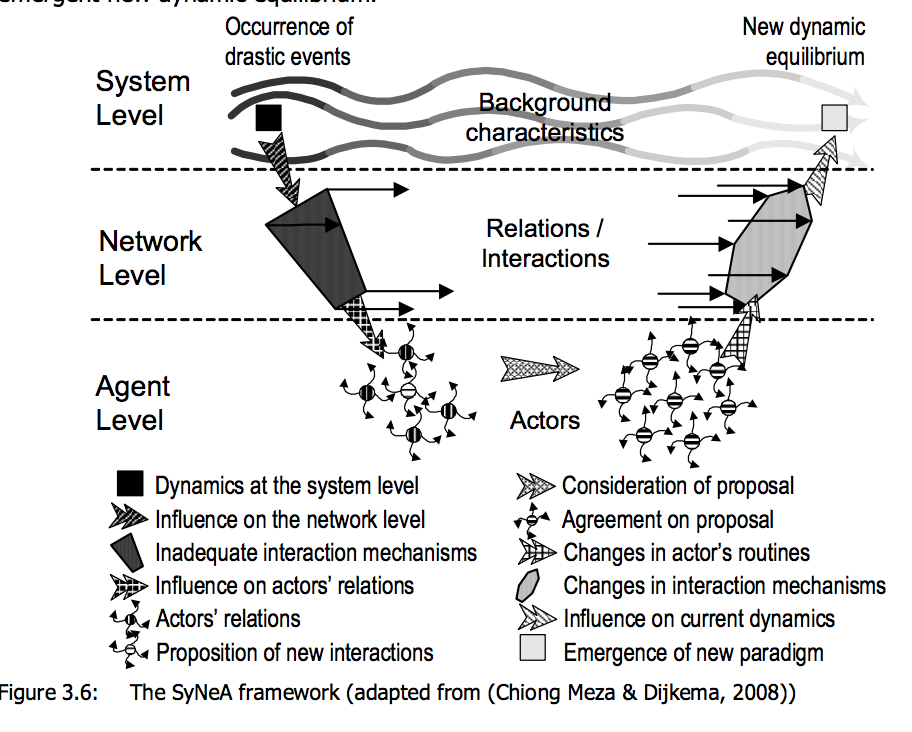 Then on the right side of the diagram, the actors come to some general agreement of proposal to move forward and the actors begin to change their routines which over time influences the interaction mechanisms of the network. This mass has an influence of dynamics at the system level and positive change occurs overall.

I think the model is missing some element of resistance at each level, but this could make an interesting model for thinking about #IndieWeb.

At the system level, you have the background characteristics of the web, the current dominance of social media and governance boards such as W3C, a standards board overseeing many protocols that run the web. Members of the IndieWeb community have worked at this level since the beginning of IndieWeb.

In fact, the first desired transition to a disturbance or drastic event was seeking an alternative to not just the direction the W3C took around the social web but to the process of how the system did work. Strict initial propositions were introduced, you had to have your own domain (relaxed since 2013-2014), and all work would be done via blogs, wikis, and chat. No list serves or email.

In more recent years IndieWeb has grown beyond the web standards community and begun to encompass anyone seeking to own their data in a place they control online, preferably from their own domain.

The occurrence of drastic events has also grown in scope. Most recently public disgust with social media like Facebook, Instagram, Tumblr, and the demise of Google+ has driven folks to seek an alternative. 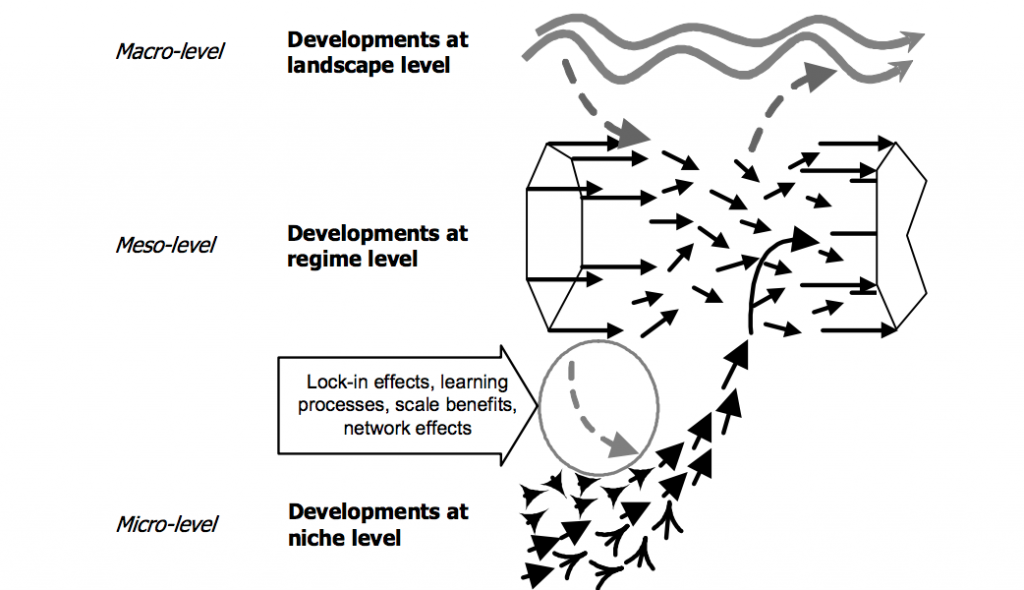 Three levels of Innovation and Resistance

I think it is useful to hone into the lock-in effect, learning processes, scale benefits, and network effects with IndieWeb. Specifically, we can not understate the importance of having your own website. The community also uses the class attribute that any HTML element can carry metadata called microformats and the majority believe in keeping the web in human readable first approaches, meaning if you printed out the source code you could still understand the text.

Microformats has served as a semiotic signifier of membership, created lock-in effects and brought scale and network effects that allowed the learning processes innovation systems require.

Negro and Hekkert discussed seven functions of innovation systems in a model that seems to be driven by free market ideals. The first function of entrepreneurial activities can be cast as more agent or creative based.

Yet there is evidence of all seven as the members of the IndieWeb community come to an agreement on proposals.

For example, In the community, we develop different post types using microformats. This can include common media types such as articles, notes, photos, and bookmarks. Rather than begin with defined standards, the normative system-level approach, the IndieWeb model of self dogfooding encourages experimentation until a consensus emerges.

Innovation at the Agent Level

The focus of developing and building for yourself., a process the community calls self-dogfooding, spurs the innovation system by focusing on change at the agent level first. Efforts to influence system change will fail if you do not live these changes yourself.

Once again the models seem to downplay the resistance to change incumbent powers and systems exert but by stressing the importance of having your own website the #IndieWeb community performs one of the first functions of innovation systems.

The community also comes to agreement on a set of overarching principles and a Code of Coduct to govern behavior.

Innovation at the Network Level

Over time IndieWeb actors made changes in their routines. Many document their growth on a shared wiki and meet daily in a chat channel that combines IRC, internet relay chat,  with Slack, a commercial chat app,

Through this evolution, the interaction lead to changes in the mechanisms of the system. This is most evident in the emergence of social readers that provide the fourth and fifth functions of innovation systems while strengthening network lockin.

The tools for learning also encouraged knowledge development and diffusion. The community maintains a growing wiki. This wiki is connected with a chatbot. People can query for articles and write stubs from the chatroom. Unlike most wiki communities no talk page is provided. Emphasis is put on editing the wiki rather than talking about editing.

Innovation at the System Level

IndieWeb as an innovation system has already influenced transition at the system level. One of the greatest lock-in draws the community offers is no lock-in at all. All of the technologies deployed in IndieWeb building blocks align to W3C and current HTML standards.

More importantly, the founding members of the IndieWeb community, while initialing seeking space to work outside of the normal channels did not get involved insystem-level decision making. The interaction mechanism developed by the IndieWeb community have started to to become standards themselves.

For example, webmentions, which connect all the websites in the IndieWeb community have reached recommendation status for the W3C.